David Eberle, CEO and Co-Founder of Typewise, joined us at CES 2021 from Switzerland to talk about his company’s unique take on the mobile keyboard.

Typewise is a smartphone keyboard that works on iPhone or Android devices, promises up to five times fewer typos, and safeguards your privacy in the process. The keyboard system, developed in partnership with is ETH Zurich, is AI-powered and completely customizable.

Typewise was developed to help improve productivity by overcoming the slow and cumbersome traditional keyboard system, that’s over 140 years old. The keyboard consists of a honeycomb interface with hexagonal keys that are 70% larger than standard mobile device keyboard keys. Space keys are in the center, conveniently situated for thumbs. While it lacks shift and backspace keys, those functions are replaced with more intuitive gestures that complement the capabilities of touch screens. The result is 80% fewer typos, a number the company arrived at by replicating a 2018 Cambridge University study that analyzed the behavior of over 30,000 users across a variety of keyboards.

Where typically every fifth word typed using a standard keyboard contains a typo, the Typewise system drops that number down to one in every 20 words, on average. Future releases will integrate autocorrect technology with voice-to-text, so the keyboard knows how the user spells certain words when typed, and the voice-to-text engine will be able to type spoken words as the user would. The keyboard will eventually work on desktops, VR and wearables, and any device where you have to input information.

The app is completely free, with no advertising, and is available in 40 languages. A premium version is available as an in-app purchase for those who type in multiple languages at the same time, enabling the keyboard to switch easily between the languages.

Visit the company’s website to learn more or download the free app at the Google Play Store or the App Store.

Sports such as running and cycling have been well supplied for several years with monitoring and tracking devices to record and improve performance. At CES 2015, several other sports have become connected, including tennis with the Babolat Play racket as well as basketball with the ShotTracker. Jamie and Todd chat to Davyeon Ross, Co-Founder of ShotTracker.

The app shows statistics (shots, makes and misses), gives workouts and helps identify on-court weaknesses. Data from multiple ShotTrackers can be aggregated into a coaching version of the app, providing an overall team view. ShotTracker is available for both iOS and Android.

The ShotTracker starter kit is on sale now for $149 from the store.

Interview by Jamie Davies of Health Tech Weekly and Todd Cochrane of Geek News Central for the TechPodcast Network. 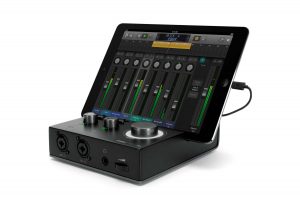 Produce your audio podcast from home or remotely from your iPad or computer with StudioConnect HD. Griffin Technology—a leader when in accessories for home, mobile, and technology—recently launched an exciting new product that will bring your podcasting into a new level.

The StudioConnect HD is an all-in-one audio interface with two TRS/XLR combo inputs, where each inputs is its own individual channel, allowing the StudioConnect HD to support multi-track recording. Each inputs also has its own gain knob and phantom power. At the back of the unit are a 5-pin MIDI connection, a USB MIDI connection for USB keyboards, and balanced stereo output for studio monitors. The StudioConnect HD is compatible with iOS (30 pin & Lightning) and OS X (USB), with future support for Windows. Plus, you can use not just your laptop or iPad, you can also use your iPod Touch or iPhone, making it even more convenient when you air your audio podcast.

Using the two stereo inputs, you can record 4-channel audio by selecting which instruments you want to use from the left and right stereo inputs. This also allows you to use multiple instrument or microphones at the same time with this USB 2.0 device. And with only $199.99, you can already own this audio interface starting this Fall. Learn more about StudioConnect HD and see how it can take your podcasting into a new height.

The gang at FYI Watches have looked at the other wearable technologies out there including the so-called smart watches. They noticed something missing – style and purpose. They took that observation and the knowledge of what we really wanted and needed in a connected wristwatch and came up with the FYI Watches. Chris Montera, the Geekymedic and Jamie Davis, the Podmedic from Health Tech Weekly chatted with Brian Pemberton from FYIwatches.com about these innovative designer watches from Geneva Watch Group, one of the largest designers of wristwatches in the world.

The FYI Watches are able to connect to your iOS iPhone or Android devices giving you all the alerts you’re looking for, without the additional wasted space or extraneous information, with just a glance at your wrist. No more embarrassing moments digging in your pocket or purse for your phone to check on a call. You’ll know who called or texted from your wrist and you can then make a determination on whether you want to bring out your phone to respond. There’s also a proximity alarm so you don’t walk off without your mobile phone, making sure you’re connected to your home and work all the time without worrying about losing your phone.

You can pick up one of these fabulous connected watches in a month or so at FYIWatches.com for around $69.00 or in a local retailer near you in the next three to six months.

Follow-up with more segments from CES 2014 here at TPN.tv and over at the Health Tech Weekly Podcast with host Jamie Davis, the Podmedic.

Rebecca Levey from KidzVuz joined Don and I for the TPN CES Live Broadcast. Kidzvuz is a COPA compliant site for kids under 13 who create and upload videos. This site – working with parents – gives kids an outlet for creating and sharing videos.

The kids own the content. They can delete their profiles at any time and no data is collected on the children. Since faces need to be seen in the videos, nobody will game the system.

Find out more at KidzVuz.com

Ionnis Verdelis of Fleksy joined Don and I on the TPN CES Livestream action. Fleksy is a software keyboard technology to enable eyes free keyboard for mobile and wearable devices. Fleksy replaces the stock keyboard and although it doesn’t have swipe technology, it does see how you press the screen. Fleksy technology has a predictive correction technology to correct errors.

If you need larger letters, or a specialized keyboard, this will help people with sight issues. The app is available on Android and iOS devices with a 30 day trial ($3.99 after).

To check out Fleksy, goto Fleksy.com

GNC first saw Sphero at CES last year and it’s a really cool toy: a rugged waterproof ball controlled from a smartphone or tablet. So what has Sphero been up to in the past year…Todd and Don find out from Ian Bernstein, CTO Founder.

While the  hardware is unchanged from last year, Sphero has grown the number and type of companion apps from around 5 apps to over 20 with several produced by third parties. New on the scene is a mixed reality app which uses the tablet or smartphone’s camera to track Sphero and overlay Sharky the Beaver on the device’s screen. It’s particularly fun as the real-world interaction with Sphero creates a relationship with the cartoon character which makes it that bit more believable.

Sphero works with both iOS and Android devices, and retails for around $130. Lots of fun and there’s an SDK if you feel like rolling your own (sorry!)

Interview by Don Baine, the Gadget Professor and Todd Cochrane of Geek News Central for the TechPodcast Network.

You may want to keep business calls separate from personal calls. You may want to keep your cellphone number private, or have responsibilities for a volunteer organization or agency that needs a public face. Line 2 is a great choice for professionals.

And as an added bonus, you can take an old iPhone, add this $10 a month application and have a fully functional phone within a wifi cloud that will forward to a regular phone or voicemail when you are outside of the wifi zone.

The joy of discovering interesting things around you is the secret appeal of this free iOS app. It’s all a benefit of geographic awareness built into smartphones – and leverages the power of other social media channels that are active in the immediate area. You don’t have to be following people or try to filter the madness of 200 million tweets per day. Roamz offers suggestions about what everyone nearby is buzzing about, as it monitors Foursquare, Twitter, Facebook, and Instagram for traffic nearby.

This app from iOnRoad turns your Smartphone into a Personal Driving Assistant. This app (Android now, iOS to come) mounts in the center of your windshield and uses the built in video camera to look at the road ahead. It then computes the closing speed to vehicles or objects ahead and sounds a warning if things are moving too fast.

What does this mean ? It means that there are another pair of ‘eyes” on the road immediately in front of you. Collision warning, lane departure warning, and when you leave the car, a handy feature that allows you to locate your car when you come back after a flight.