For decades, we’ve been promised flying cars. In The Jetsons, we were told that flying cars were not new and had been around for years. But, the show takes place in 2062 – only 40 years from now. So, where are the flying cars? We’ve seen a few at CES in the past few years, but MACA is poised to make them far more interesting and usable.

Maca is a new company that started with an idea that appeared in Airbus in 2018. The idea was a flying car with hydrogen as an energy vector. The prototype was being developed for three years inside of Airbus before the founders decided to move the project outside of the company and into a new company at the end of 2020. The concept consists of using this aircraft in the racing environment.

Given that there are fewer constraints in the racing environment, MACA can develop the technology at a faster rate. The hope is to use this technology in future flying taxis. Mr. Thierry de Boisvilliers also mentioned that this concept will accelerate social acceptance. He supports this claim by giving the example of how cars were used for racing in the past. Then eventually, cars were accepted by society.

MACA is poised to revolutionize the flying car industry with its upcoming release of the S11. Unlike other flying cars that rely on combustion engines, MACA’s carcopter uses clean-burning hydrogen-based fuel cells for longer flight times and green energy sustainability. With a focus on speed, safety, and sustainability, the company is leading the charge into the future of flight!

How does it work?

The MACA carcopter is a hybrid that uses racecar technology integration. It has four rotors that provide lift and two rear-facing propellers to provide thrust. The carcopter runs on hydrogen fuel cells, which gives it a longer flight time than other flying cars. Additionally, the MACA Carcopter is designed with safety in mind. It features an autopilot mode as well as backup systems that will keep you safe even if one of the rotors fails.

The MACA Carcopter has a top speed of 200 km/h and a flight time of 45 minutes. It can carry up to 400 kg, making it perfect for small cargo or passenger transport. And, like other electric vehicles, the MACA carcopter produces zero emissions!

So mark your calendars – 2022 is going to be an exciting year for flying cars! MACA is leading the charge with its innovative S11 model that uses clean-burning hydrogen fuel cells and racecar technology integration. With a focus on speed, safety, and sustainability, MACA is paving the way for the future of flight! Stay tuned for more information about this revolutionary product.

So what are you waiting for? 2022 is going to be an exciting year for flying cars, and MACA is leading the charge with its innovative S11 model! Head to the website for more information about this revolutionary product – you won’t want to miss out on the future of flight!

Interview by Todd Cochrane of Geek News Central and Christopher Jordan of The Talking Sound.

Kostiantyn Borysov is the creator of Knuckles 5, a multi-faceted, one-handed drone controller.

Drones are a big business in the U.S. Of the nearly 2 million drones registered with the FAA, about 1.3 million of them are recreational drones. There are currently over 200,000 certified remote pilots. By 2025, it is estimated that the market for commercial drones will exceed $13 billion per year (Stastica). So Knuckles 5 made a prime time entry at CES 2021, with some promising new developments in accessibility and functionality.

Designed initially around the idea of a flight stick, Knuckles 5 utilizes a single 5 button, 3 analog joystick with eight axes, and two modes. The device features two trackballs – one moved by the index finger and the other by the thumb – to control a drone along a combined four axes. Two more axes controlled by a mini-joystick, and another two axes by an IMU (inertial measurement unit) that picks up controller tilt. Using GUI (graphical user interface), it is technically possible to have 19 possible axes or 40 different buttons configured through the custom set up feature – all controllable with one hand. Borysov said the controller also provides for faster drone control than current controllers offer.

Still under development, the controller will be able to potentially control everything from pocket drones to commercial UAVs. And more intriguingly, the controller makes it possible to control two drones at the same time. Knuckles 5 opens up drone flying to people with disabilities, and Borysov is currently seeking people to test the device. While designed for flying drones the controller can also be used for video game play.

Knuckles 5 is expected to be available some time this year, and will retail at around $250 to $300. Visit the company’s website to learn more.

Flir created a minor sensation few years ago with the Flir One thermal imaging attachment for smartphones costing only a few hundred bucks. Building on this, Flir have launched the Duo, a dual sensor compact camera designed to be carried by drones. John gives Todd a quick demo of the new Duo and see if you can spot the GNC cameraman. 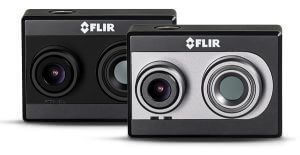 The Flir Duo combines both visible light and thermal sensors into a single camera which can be carried by any drone that attaches GoPro cameras.  The visible resolution is full HD at 1920 x 1080, whereas the thermal camera is only 160 x 120. This might seem poor but the resolution of thermal imaging tends to be much lower. Flir has a nice trick called MSX blending where the visible and thermal images are combined to give more detailed pictures. There’s a demo here.

There a two versions, the Duo and Duo R, with the latter providing calibrated radiometric temperature measurements, i.e. it can tell accurately how hot an object is. The Duo is priced at US$999 and the Duo R is $1,299. Available now.

Flir have partnered with drone makers Autel Robotics and paired their Duo with the X-Star Premium drone for an all-in-one package including customised flight software. Oddly the package appears to be available only to US military and no word on price.

Parrot had a lot of different types of remote controlled drones at CES 2014. One of them was called the Jumping Sumo. The Sumo is a small remote-controlled device that can turn on a dime. Controlled with your smartphone or tablet, you can use two finger gestures to turn and control. The camera on the Sumo allows for 1st person view.

The jumping sumo has two large wheels that can push together for better control. It’s big feature, though, is the fact you can push a button and have the sumo jump up in the air — approximately 2-3 feet up.

The sumo can also be controlled up to 160 feet away with the mobile tether. The VGA (320×240) image returns to the device so you can see what it does.

The jumping Sumo is not out yet, but you can watch for it at www.parrot.com/usa/ces/

RC Pilot Fun on a Budget

RC Logger introduces an affordable unit that will let you get started in the remote control aircraft hobby on a budget.  RC Logger has set out to find the sweet spot with a $79 unit that has the range and performance that challenge the bigger units and provide affordable entry into the RC pilot club.

The unit has a learning mode to allow you to start slowly. After you build your skills, there’s a more aggressive sport setting. Flight times are about 7-8 minutes. The unit will go about 20 mph and with a 915 Mhz system you could easily run it out of sight before it will  run out of range. It recharges from a USB in about 20 minutes. More details at RCLogger.com
TPN Interview by Andy McCaskey of SDRNews.com

There are some products that are shown at CES that are just cool and everyone who is a kid at heart just wants, the AR. Drone by Parrot is one of those gadgets. This year at CES 2012 they introduced AR. Drone Mark 2. The Mark 2 (aka AR. Drone 2.0) is controlled by a smart phone or tablet. It has a one button launch. Once it is launched it will sit and hove till the next command. The AR. Drone Mark 2 can fly up to 150 feet in the air, or as far as wi-fi will allow. AR. Drone Mark 2 has stabilization and pressure sensor technology built into it. On the front is an HD camera and a standard def camera on the bottom. You can stream and record the video back to the phone via wi-fi. The video can then be uploaded to your favorite social site, including YouTube and Facebook.

It come with two hulls one for in home use and one for outdoor use. It is built to take some crashes, but if something breaks you can get replacement parts are on-line. The AR. Drone Mark 2 should be available according to Peter George of Parrot in the second quarter of 2012 for about $299.00

Once you are finished playing with the AR. Drone Mark 2, you may want to relax with a little music and some quiet time, well Parrot has you covered there too. They are introducing a pair of stereo cordless headsets that are noise canceling called the Parrot Zik . They work over either Bluetooth or the included cord. They run on a chargeable battery and give about 5 hours of listening pleasure. Once the battery runs down you can continue listening by connecting the cord. What makes the Parrot Zik headphones stand out besides the great style by French designer Philippe Starck are the controls on the headphones. There is a sensitive touchpad on the headphone which allows you to skip back and forth thru tracks by swiping right or left and control volume by swiping up and down. The headphones fold down flat to fit into a small carrying case. There is no price or launch date at this time, but they should be available sometime in 2012 at various retailers. All together Parrot introduced seven new products at CES 2012, including three additional products in the car environment and the asteroid marketplace. You can take a look at all of them at their Web site Parrot.