So your smart phone shows 2% charge and you are hours way from finishing the day.  You start to search frantically for the cord you need to connect your device to your portable charger, computer, wall outlet or whatever other means you have to charge your device on the go.  Of course, the cord is missing and your phone is useless the rest of the day.

Jacques Emano, President of 911Boost, realized this issue and set out to develop a portable charger that didn’t need a cord.  The 911Boost is what they developed.

911Boost is about the size of a car remote with an attached keyring.  You smart phone connects directly to the device via the tabs that set around the outside of the charger.  Easy to carry and ready to boost 98% of the smart phones currently on the market including most Androids and iPhones.

Their motto is “Never be left with a dead phone again, always be in charge!”  More information can be found at http://911boost.com/

Interview by the “Guru of Geek” Marlo Anderson of The Tech Ranch for the TechPodcast Network.

Have you ever unpacked your bags only to find that you brought the wrong laptop charger? Are you someone who gets confused about which charger goes with the different devices used by you and your family? Zolt offers a very simple solution to these frustrating problems.

Nick had a chat with Steve Gibson from Zolt about their versatile charger. It has been described as the world’s smallest, lightest, smartest laptop charger and was a CES 2015 Innovation Award Honoree. The Zolt laptop charger can charge up to three devices at the same time.

The charger ships with a proprietary 6 foot cable that matches the color of the charger. It has interchangeable PC tips that match about 90% of the PC’s on the market. In addition to PC laptops, the charger can work with Apple devices, Samsung devices, and all popular Android products. It can also be used to charge a GoPro or Boss portable speaker.

Best of all, the charger has the intelligence to figure out the appropriate amount of watts and volts to go into whatever device it is charging. The charger is small enough to fit in your pocket, weighs 3 ounces, and has retractible prongs.

Interview by Nick of F5 Live for the TechPodcast Network.

USB power packs for charging smartphones can be found everywhere and companies are striving hard to find their niche in a crowded market. Todd talks with Craig Miller from Powerocks about how they’re going to set themselves apart.

Powerocks has adopted a two pronged approach. It’s taking USB battery packs and giving them a lifestyle makeover, in this case a leather covering, to make them more appealing to a wider audience and sold in mainstream stores.

Secondly, Powerocks is using its battery expertise to build products that aren’t only smartphone chargers but are also chargeable batteries themselves. The Jump Starter vehicle emergency unit includes a 10,000 mAh battery, USB charging ports, an LED signal light, a torch, a distress alarm, a steel break-glass and a car jump-starter all in one unit. 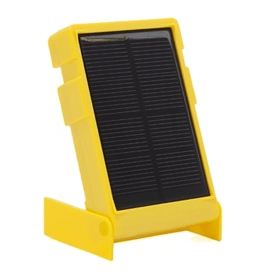 Solar powered chargers and lights are not new, but when you do something valuable and helpful — that gets you noticed. That is what I liked about Wakka Wakka: the company is making solar products that help you along with helping people in 3rd world countries get power as well.

Wakka Wakka has on one end a solar panel that can charge the battery inside and give you over 40 hours of light. It can also charge devices if you need emergency power.

The device charges within 8 hours itself and is a perfect item for you boat, house or anywhere you need emergency power. The stand has a hole in it so you can set the charger on a bottle. That way you lift it off the window sill and get the solar device powered even faster.

Wakka Wakka also is helping in 3rd world countries that do not have a standard power grid. By powering these devices in the sun, they can charge their systems to make the day go faster. They also have lights for nighttime travel.

Best part is they are developing a full home emergency kit. The device is not released yet — you’ll have to watch the video for more information. In the meantime, go to www.getwakawaka.com for product lines.

Kirk H&J offers an entire range of Inpofi devices and models that enable wireless charging using a proprietary transfer system called “Electric Transfer” to charge devices by placing them on the charging surface.

For the Samsung S3 – you remove the back to install the system.  For the iPhone there are a variety of cases , currently for the iPhone 4 – with the iPhone 5 due in the first quarter of 2013.  Charging times are similar to wired systems, and offer over 90% efficiency. You can mix and match iPhone and Galaxy devices.

The units are available presently at OhmTopia.com , and should soon be found in regular big box stores.

At CES Unveiled iGo showed a number of accessories for your iPhone and iPad devices. The iGo Power Xtender will power your mobile devices from just two rechargeable AA batteries. The Pocket Speaker runs on two AAA batteries and fits in your pocket and brings dynamic sound anywhere you go.

The Smartphone Stand is a compact a stand that holds your smartphone, iPod or any other device while watching videos!

KeyJuice allows you to charge and sync your iPod, iPhone or iPad with this sleek Made for iPod cable that folds and fits on your keychain. KeyJuice gives you charge and sync capability in one compact, portable unit. No need to carry extra cables

Get your 14 day Free Trial of Audible Gold to start Listening to great Books!