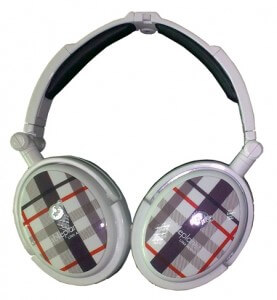 Todd listens to Mary Semcken, VP of Marketing for Able Planet, which has an innovative technology for reducing the decibel level of headphones without reducing the richness of the sound. Amazingly, Able Planet has won a CES Innovation Award every year from 2006 through 2010.

Mary shows off three new headsets, the first in military-style colours so that you can wear the colours of your team while playing Call of Duty. Camo, desert, navy.

Secondly, Able Planet has developed a Signature series of headphones in conjunction with a number of sportstars. Motocross women’s champion Ashley Fiolek has a pink set with 10% of proceeds going to breast cancer charities and Chris Anderson’s (“the bird man”) Signature set has copies of his tattoos on the phones.

All available shortly from major retailers and direct from Able Planet.