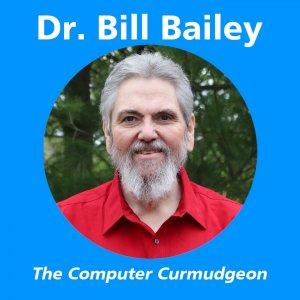 Dr. Bill does a special tutorial on setting up independent Internet Radio stations to play via voice command through Alexa! You can already play most terrestrial radio stations using iHeartRadio or Tu

Dr. Bill shares THREE great hints and tips in this ‘catch-up’ edition! We check out X2Go Client/Server, the use of WINGET in Windows to upgrade your software, and a quick intro to the EMEET C960 USB 2

Dr. Bill does a review of the Wal-Mart OnnTV 4K Streaming unit, a $19.00 gem, added to the use of TWO SiliconDust HD Homerun 4-Tuner OVA DVR/Tuners, his indoor antenna array, and the Channels DVR, a F

Dr. Bill does a review of the ZUMIMALL GX2S PTZ Wireless Security Camera to secure your home, as well as some tech news about a Google Chrone Browser hack, and a teaser for the next show on the Wal-Ma

Dr. Bill shows off his brand spank new (to him) audio interface, that you just have to hear to believe! Check it out! The Presonus IO24 USB Audio Interface! (Apr 06, 2022) Links that pertain to this N

Dr. Bill delivers a ‘mea culpa’ and explanation on his last show, and then shows us a new toy, the Mediasonic Homeworx Digital Media Converter Box! (Mar 30, 2022) Links that pertain to this Netcast: T

Dr. Bill tests and demos Nvidia Broadcast using his new (to him) ASUS Nvidia Geforce RTX 2060. Check out the “buttery” Boca effect using either the Elgato Facecam or the Sony a6400 DSLR. Graphics powe

Dr. Bill tests the Logitech Mevo Start camera and Multicam system. He demonstrates how to use a video editor to figure out the timing for OBS audio sync. He also compares video from the Sony a6400, th

Dr. Bill discusses his Beelink SER3 AMD Ryzen 7 mini-computer, which is WAY more powerful than his previous system, and the fact that ATT wireless dropped 3G support this week. Also, a brief intro to

Dr. Bill introduces his new Elgato Facecam for comment, do you like it? Linode is purchased by Akamai, FuboTV goes to a quarterly subscription, then drops back to monthly! (Feb 16, 2022) Links that pe

On the 500th Episode of the Dr. Bill.TV Show, Dr. Bill and his son, the GameMaster, discuss popular TV, Movies, Anime, and other entertainment of the day, as tradition dictates! (Every 100 episodes th

Dr. Bill shows us a ‘how to’ on cord cutting for someone living in a condominium that wants to watch OTA (‘Over the Air’) TV! He shows us two methods, one totally INSIDE the condo, and one actually OU

Dr. Bill shares with us the issues involved in the Locast shutting down court case, and whether there are any chances for a similar broadcast-to-Internet service to emerge. (Sep 03, 2021) Links that p

Don’t want to be ‘stuck’ when Windows 11 comes out? What if you have perfectly good, but ‘older’ hardware? Here are some alternative operating systems you may want to consider! (Aug 28, 2021) Links th

The 2021 Blackmagic Design Event rollout of new tech, new 4K Studio Cameras, and more! Meanwhile old tech is dying! 1st Gen Kindles will be bricked by year’s end, and what ‘old tech’ is being removed

DrBill.TV #496 – Video – The Elgato Event Plus Your Network Security with Pi-Hole Edition!

Dr. Bill discusses what has happened to the Open Source ‘Audacity’ project recently and the Open Source community’s reaction to that fiasco, and his opinion on how Microsoft may NOT necessarily hate u

DrBill.TV #494 – Video – The Microsoft AND Windows Are Evil Edition!

DrBill.TV #492 – Video – The My Video Studio Has Finally Come Together Edition!

Dr. Bill continues his testing of the ELECABLE PCIe 4-Port HDMI Video Capture Card, and the StarTech.com 4 Port USB 3.0 PCIe Card w/ 4 Dedicated 5Gbps Channels he tried to replace it with in his studio. BOTH were failed experiments.

DrBill.TV Special – Video – How to Setup and Use the PLEX DVR with a Hauppauge WinTV-quadHD PCIe Card

How to select, and use a Hauppauge WinTV-quadHD PCIe Card in a spare PC to create a PLEX Quad-tuner DVR for Cord Cutters to record Over-the-Air TV, manage their video, movies, and other media on a Local Area networked PC system!

A Special Review of Stremium – A DVR and Viewer for Multiple Web IPTV Services, Including Locast! (Video)

Dr. Bill reviews the Stremium DVR Roku application, the Android Phone version, and the Web version of Stremium. Every version, on every platform, has very different features, and basically must be used in conjunction with each other for the FULL benefi...

DrBill.TV #490 – Video – The Way Too Long, But Important Info Edition!

Dr. Bill introduces us to Locast, and Locast2Plex, a method for using a Python program to set up the Plex system and DVR with the over-the-Internet Locast OTA TV channel service. (Mar 05, 2021) Links that pertain to this Netcast: TechPodcasts Network I...

Linux Mint 20.1 is out, good news for Linux gamers, the GPD MicroPC is at a stupid low price on Facebook, or is it? Elon Musk is the world’s richest man, a cool Windows tablet build, Chrome on any PC, I support Free Speech, GSotW: TinyPilot IP KVM!

Dr. Bill does a very quick (and clumsy) review of the Taotronics Soundliberty 92 Bluetooth ear buds, and a demo of the Puffin TV Web Browser in Google Chromecast with Google TV (Jan 07, 2021) Links that pertain to this Netcast: TechPodcasts Network Int...

Dr. Bill discusses other platforms he is on, he follows up to his rant on YouTube, and shows us a great small video light: the Ulanzi Select VL49 LED Video Light! DirCaster V1.0 is out as of December 1st, and Dr.

Dr. Bill finally gets to have his rant about the evil that is Big Tech censoring free speech, and he demonstrates RoboForm, his new choice to replace LastPass as his password manager! 00:31 Introduction 02:57 Geek Software of the Week: RoboForm 06:07 R...

Dr. Bill discusses Dish Network shutting down the Slingbox, the new USB4 standard coming soon (2021) that will increase the speed of USB, and add dual channel functionality, Google wants your help in their quest for world domination! And,

Dr. Bill demos Google Chromecast with Google TV, and shows us how to engage ‘Developer Mode’ on it, he demos Clonezilla, and discusses Bitwarden, a Lastpass Open Source alternative. Links that pertain to this Netcast: TechPodcasts Network International...

How does one set up a Linux Fileserver to share out a USB based Seagate Expansion Drive? Dr. Bill shows you how, and makes some comments along the way! Join him in his quest to eliminate Microsoft from his server rack!

Dr. Bill finally has content from his Blog! Eric Steven Raymond, known as ‘ESR’ says Windows may go away, replaced with Linux, by Microsoft! The sad death of FTP, coming soon? A free tutorial for Python, and an overview of the Google Chromecast for 202...

DrBill.TV #477 – Video – The Linux Pretending to be Windows Edition!

Dr. Bill installs and demonstrates WindowsFX (or, LinuxFX) to us, as well as doing the same with the latest, greatest version of Linux Mint, Cinnamon Edition! Links that pertain to this Netcast: TechPodcasts Network International Association of Interne...

Dr. Bill is back after almost two months because his condo was flooded out! GSotW: Ultrasearch! Discussion of YouTube, Google and Facebook suppressing freedom of thought and speech! Links that pertain to this Netcast: TechPodcasts Network International...

Dr. Bill does an unboxing and demo of a $14.00 USB 2.0 HDMI Capture Card, and shows how to set it up in OBS (Open Broadcasting Software,) and some test footage. Short Links to the card on eBay and Amazon are below: eBay: https://tinyurl.

Dr. Bill actually has content this week about Linux of various ‘flavors,’ as well as news on why some Linux purists hate Snap, a StarLink Internet Update, Linux Mint is DROPPING Snap, discussion of Ubuntu Linux 20.04 LTS, and a GSotW: PC Equalizer!

Dr. Bill does a demo of the Geek Software of the Week – O and O ShutUp10, which will ‘clean’ your Windows 10 installation, and discusses his new Shure SM7B microphone and the fact that Google has outstripped Microsoft in the running for most Evil Empir...

Dr. Bill demonstrates the MakuluLinux-LinDoz Edition, a Linux for Windows users! – Check out the Dr. Bill.TV Blog at: https://www.drbill.tv Links that pertain to this Netcast: TechPodcasts Network International Association of Internet Broadcasters Blub...

Dr. Bill gripes about a few things involving the Evil Empire… Microsoft! He also discusses his new microphone, Cloudlifter, and shows some video from 1987 from CIBA-Geigy while he was working on a Digital VAX 8650! – Check out the Dr. Bill.

Dr. Bill shows us the Canon EOS WebCam Utility Beta utility that transforms your Canon DSLR into a webcam over your USB port! – Check out the Dr. Bill.TV Blog at: https://www.drbill.tv Links that pertain to this Netcast: TechPodcasts Network Internatio...

Dr. Bill discusses the new web site for USTVGO, Jitsi, an Open Source alternative to Zoom conferencing, and a free webcam app in YOUR phone’s appstore called iVCam that allows anyone with a smartphone to connect it to a PC to do a web conference.